This isn’t a tale about “the one that got away”, it’s about the first, and last, fish I ever caught.

I must have been about fifteen at the time and we were camping at one of our favourite campsites, Merthyr Mawr, in Bridgend.  The campsite was at the beginning of some sand dunes which led eventually to the beach, or alternatively, the Ogmor river was nearby and this could just as easily be followed to the sea.   Such was the time and environment then, that three girls, aged 17, 15 and 10 were allowed to wander at will on holiday without the fear and restraints that today’s society would have put on them.

On such  a holiday we, three sisters, wandered to the sea via the river, paddling along in the water with flip-flops underfoot and there I “found” a fish.  You can see by the size in the photo that is was no small fish which meant it was also no mean feat for the skinny 15-year-old (yes, I was skinny once) to “help” the fish to the sea.

In fact, it was pretty back-breaking work, bending almost double and paddling along guiding the fish in between the rocks trying all the time to keep it in the water.  Eventually my efforts paid off and we made it to the sea, I waded out to about knee-deep with the fish, pointed it towards the open sea and set it free …

I’d like to say I was upset for the poor fish, or even vaguely worried about its well-being, but I think annoyed would have been a better description of my feelings at that time, after all the hard work I’d just put in “rescuing” it from the rocky river I couldn’t believe all it did was sink !

So … I hoisted it high on my shoulder and took it back to the tent to eat.

After the back-breaking struggle down to the sea, I now headed back in the opposite direction to clamber over the sand dunes.  I guess I wasn’t quite the normal sight to be seen walking back through the campsite, I did draw a few questioning glances as I went.  One of my sisters ran ahead to warn my Mum … “Sallyann’s caught a fish” … but I don’t think she was quite expecting what she saw when I turned up.

There we were, in a tent, with no fridge and this huge fish to eat.   Mum cut it into large slices and fried some of it, then the rest was kept cold in a bucket of water which had to be continually refreshed to stop it going off.

What type of fish was it ?  Well, it turned out to be a salmon and apparently, it had been heading inland from the sea so no wonder it wasn’t too overjoyed and ready to swim away when I returned it to the sea.

Oh, by the way, excuse the quality of the photo, but it’s the only one we have by way of proof of the first and last fish I ever caught. 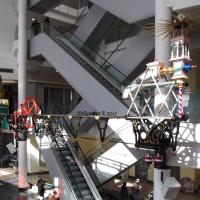