After “Operation treegone“, and after a delay or two, the builder took over in the garden.

He spent his first day taking away the little wall behind the tree and breaking down the brick wall behind the old patio area, then digging trenches ready to lay the footings for the new back wall and flowerbeds and after day one, the garden looked even more like a building site than it had before …

The next morning, I had a message to say everything was on hold again as my builder had dislocated his finger, so while the cat was away, the mouse played …

I’d bought myself a sledgehammer and so I put it to good use on some of the rubble. The non-building time gave me the opportunity to take up the last of the rotten decking and to make a start on the “Crazy jigsaw” which  is to make up the new patio …

The builder’s second day finally arrived and he was able to lay the footings for the back walls, and dig out some of the concrete for a drainage chanel around two sides of the yard.

The little concrete yard between the patio, the back door, and the kitchen window was part of the “Downstairs inconvenience” episode on Christmas evening.  The yard has raised the floor level outside of the back door, and also been put down with a slope towards the house.

However, once the new drain chanel has been bedded in, hopefully we shouldn’t have to worry about flooding from rain in the back garden coming into the kitchen again …

The builder’s third day started off with rain, but the plan was to use this day for a delivery day anyway, to bring all the supplies needed for the wall the following day.   Frustratingly, not very much happened at all apart from the appearance of a few stacks of blocks, and the assurance that everything would look a lot different by the end of the fourth day. (with a tiny little proviso of the weather thrown in between the lines and a hint at a transport problem).

No builder the next morning, followed by rain, but then the rain passed and two builders arrived and stayed well into the evening working until the light was fading.

What a difference a day made… 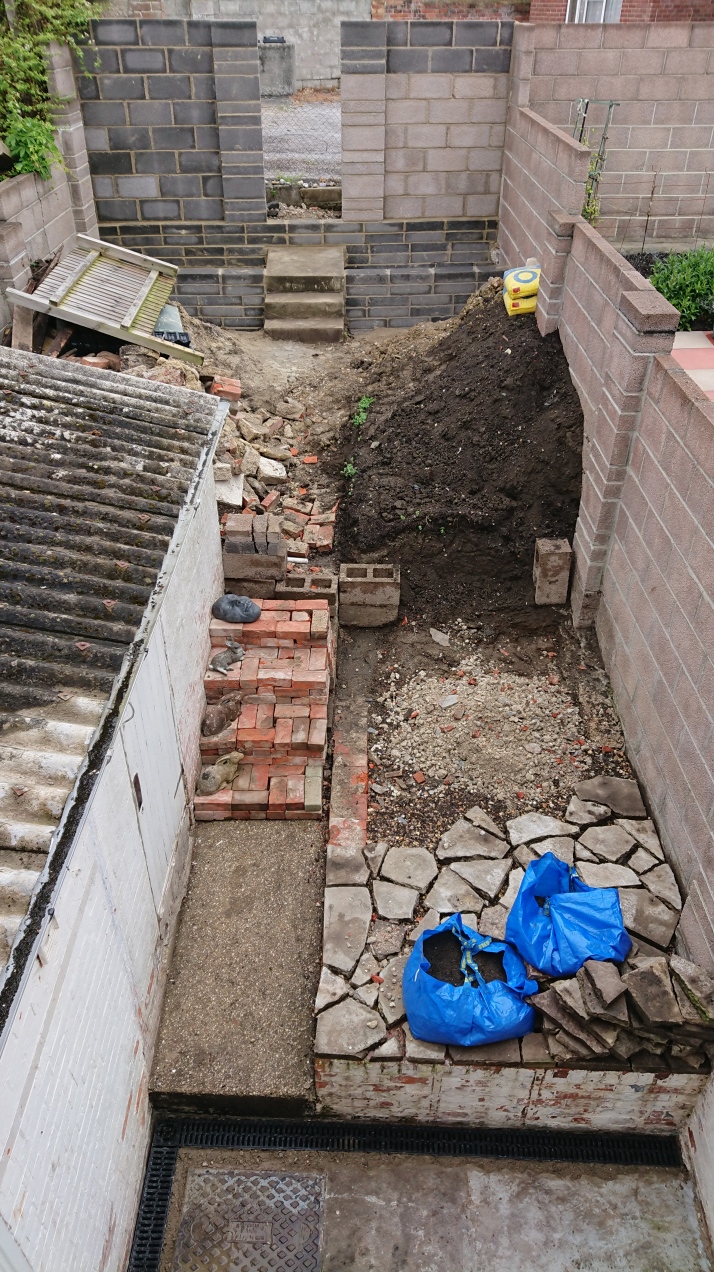 A day off for the builder followed, and there was a chance for me to do more of my bit.  The walkway behind the wall needed to be levelled, and it made sense to do that before the gate was in the way and the flowerbeds needed to be cleared of the remaining tree roots and filled with soil from my mud mountain.

After leveling off the walkway with some of the smaller bits of rubble, I set about a little patch of offending concrete from the old foundations in the right hand flowerbed with the sledgehammer before filling it to the brim with the well used soil left behind by the keen gardener who lived here before us. The left flowerbed still needed working on before I could fill it, so I settled for just digging out the last big tree root and moving some of my mud mountain into IKEA bags so that the builder didn’t get buried under an avalanche while digging the foundations for the dividing wall the next day.

Working in retail, I sometimes forget that not everyone is available day and night, 364 days a year and frustrating as it was, the building trade stopped for a weekend, the builder dug out his trench for the dividing wall footings and any attempt by me to move around the garden was bringing my mud mountain dangerously close to tumbling into the big hole which had appeared in the garden while I was in work. 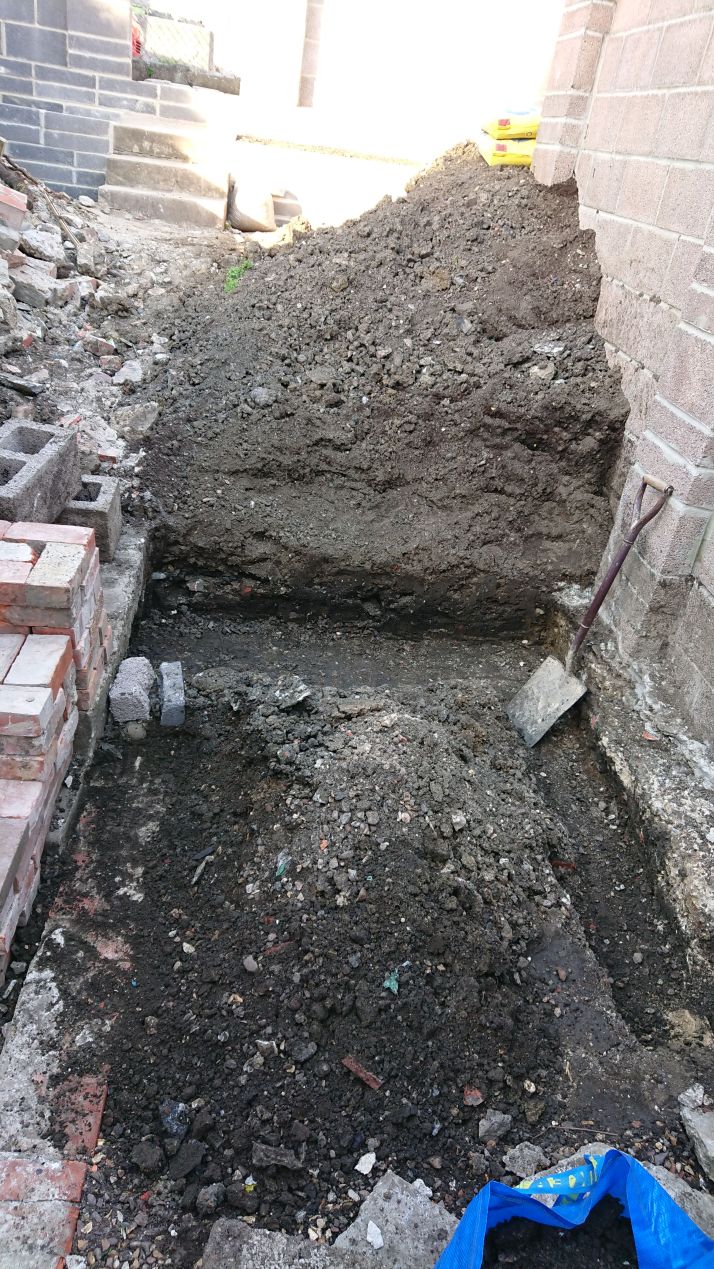 It seemed I had no choice but to stop my work in the garden for a few days too. 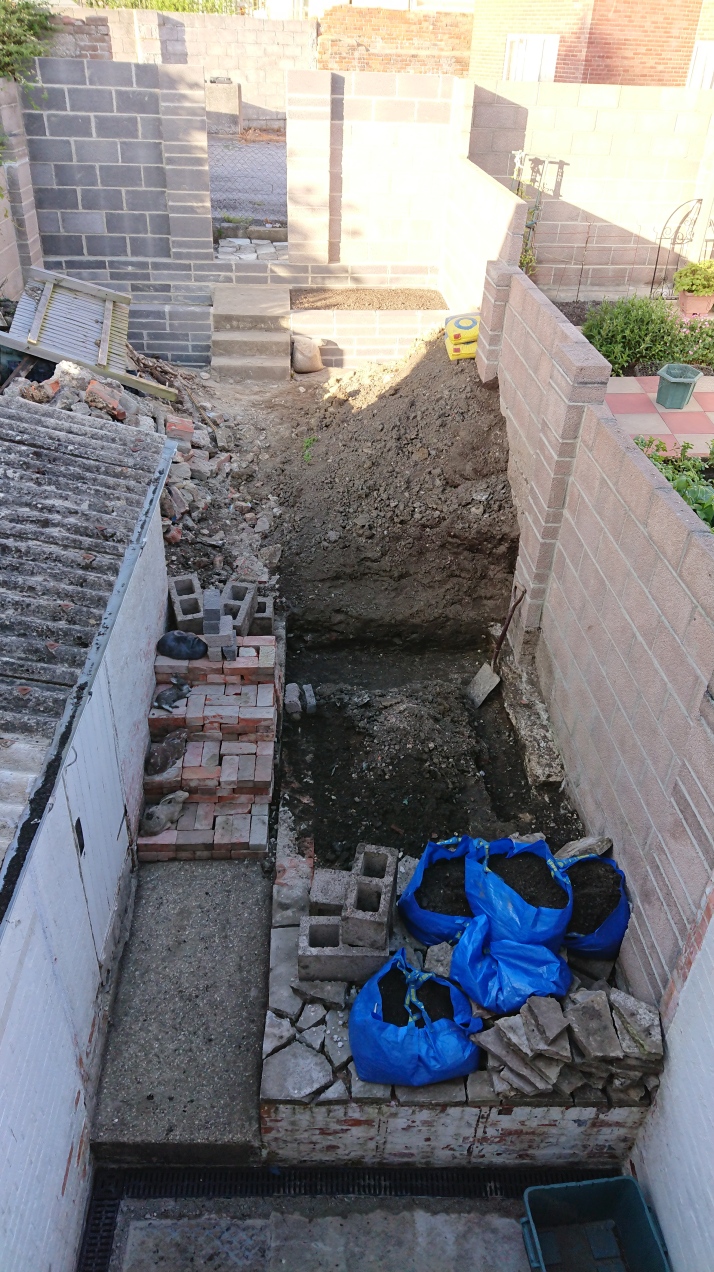 My builder came back after what seemed like the longest weekend ever. I hadn’t quite managed to stay completely away from the garden, poking around in the rubble I pulled out some pieces of an old smashed up breeze block wall and used them too carry on laying some sort of path behind the back wall in the walkway. 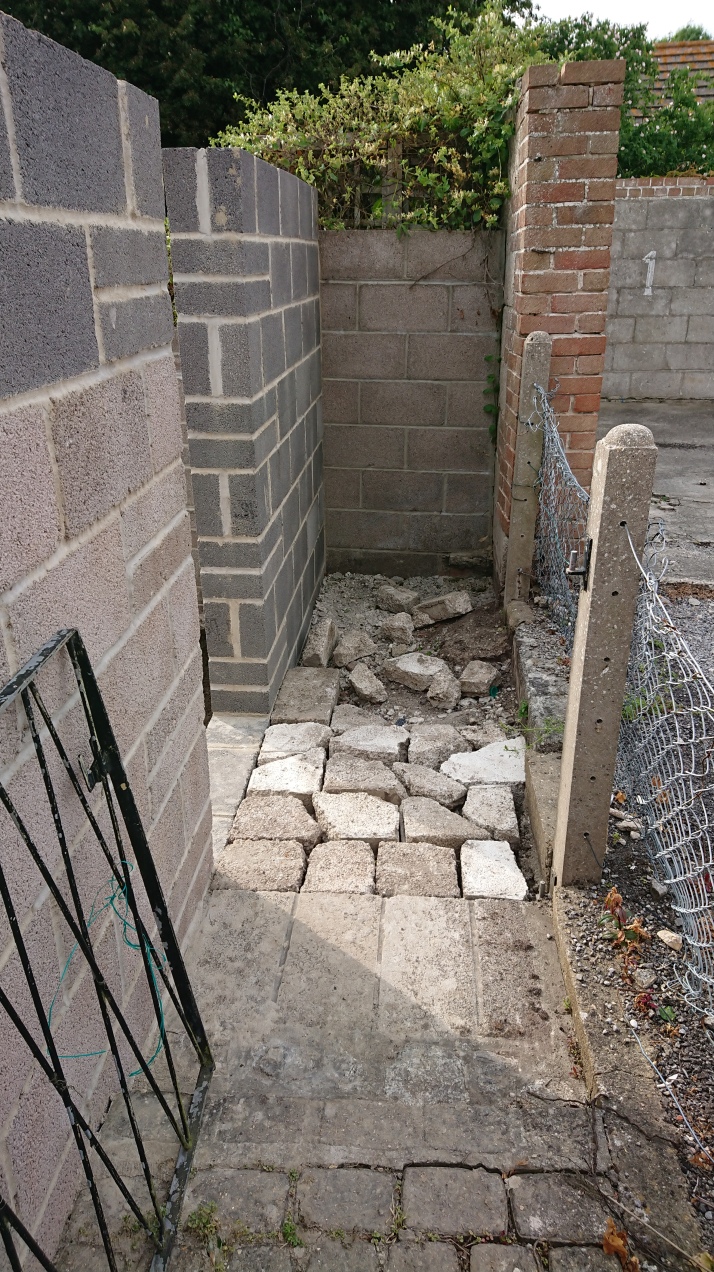 Once the builder arrived, I left him in the garden in peace to fill his trench with concrete and to smooth off the edges of the chanel in the yard.  The plan was for him to return two days later to build the dividing wall. 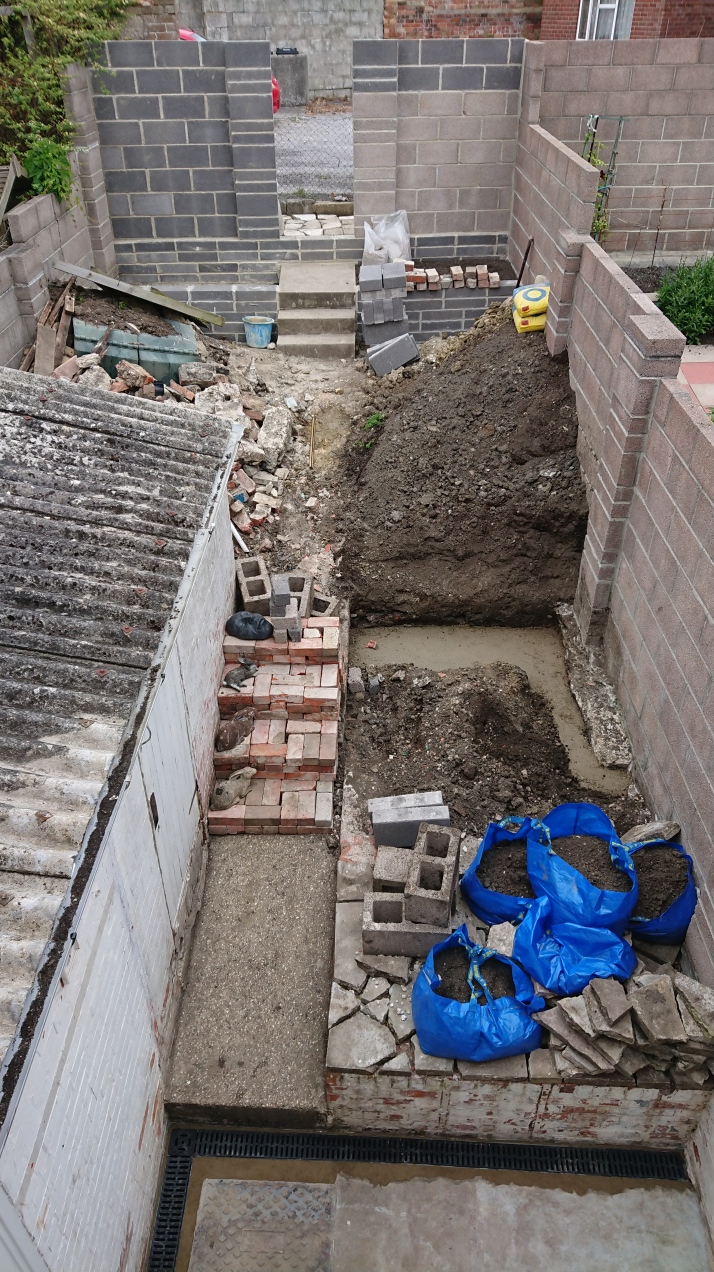 One of my plans needed a bit of a rethink, the foundations I had been building out of old bricks had too much movement in them to make into safe permanent steps … back to the drawing board. 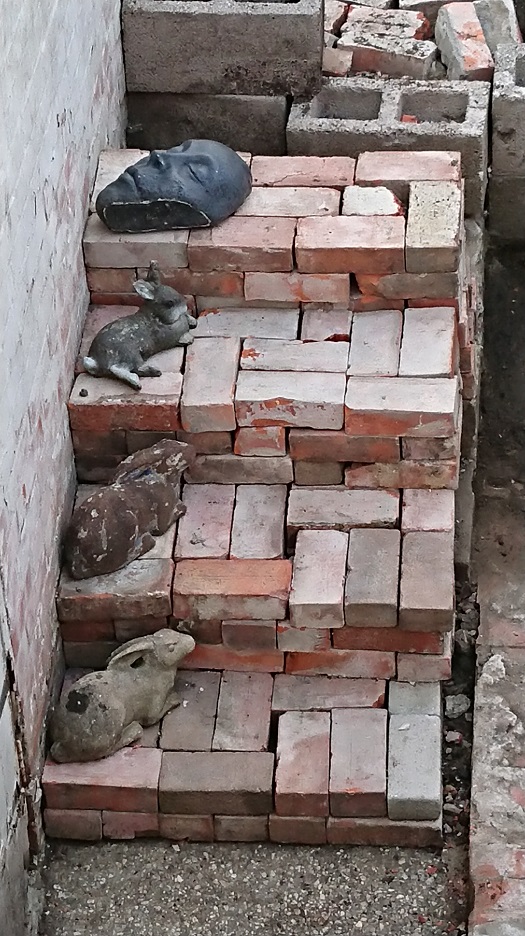 The next day the dividing wall went up and the seat bases were built to disguise and support the side wall foundations.  Not wanting to climb on the drying concrete in the wall, but unable to leave things as they were, I walked around the block in my wellies with my spade to fill the second of my “Flowerbeds“.

There was no builder for us the following day so, being able to clamber over the wall I played some more in the garden myself.  Remember the big green compost bin ? I managed to take it apart and pile more than enough really rich compost onto the one flowerbed ready to share between the two, when the builder moves on.  The bin itself, I piled onto the new patio along with the old decking planks for me to cut up into car size pieces for a tip run. They charge at the tip if you take rubble, but there’s no charge for plastic or wood so it makes sense to bury the rubble and tip the rest.  Once the rubbish was moved out, it was just a case of moving the soil to the back of the garden and the rubble to the front.

The gate came with the builder on the following morning, but would you believe it ? It was too small.  Honestly, if I was writing a book you’d say my storyline was too far fetched.  Another weekend got in the way, another visit from the builder was planned for early the following week to make the steps, fit the bigger gate, and top off the side of the patio seat.

In the meantime, I set about more of my part in the building of the garden.

I cut up the wood ready for tip run and moved it into the shed to keep it dry until it could be taken away. Then I dug out the last of the rubble from under the old decking and leveled off the new patio area ready for my crazy paving. 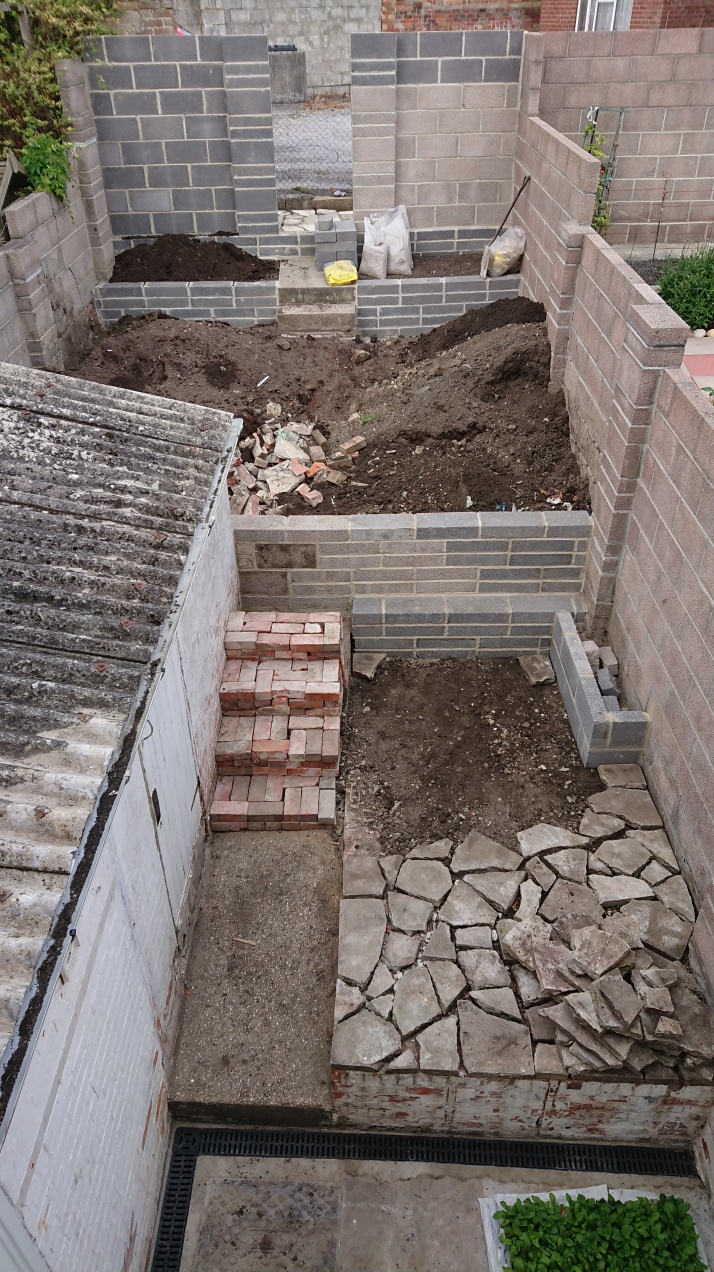 The bricks I’d piled up for foundations for steps were thrown over the dividing wall to make way for my builder to make block steps, and the rest of the crazy paving was mapped out ready to be levelled when the ground underneath had settled. Finally it was starting to look like the plan from “Garden potential“.

The next date for the builder seemed so far away, but I used my frustration wisely and attacked the last of the tree roots in front of the left flowerbed with the slight bonus of finding a few more big bits of broken slabs for the crazy paving to replace the little bits I’d managed to find before.

The builder arrived and built the steps but you’re not going to believe this… The replacement gate was too big.

It would seem the gap in the back wall was to survive for another day and I would have to be content with just redoing my crazy jigsaw with the bigger pieces. 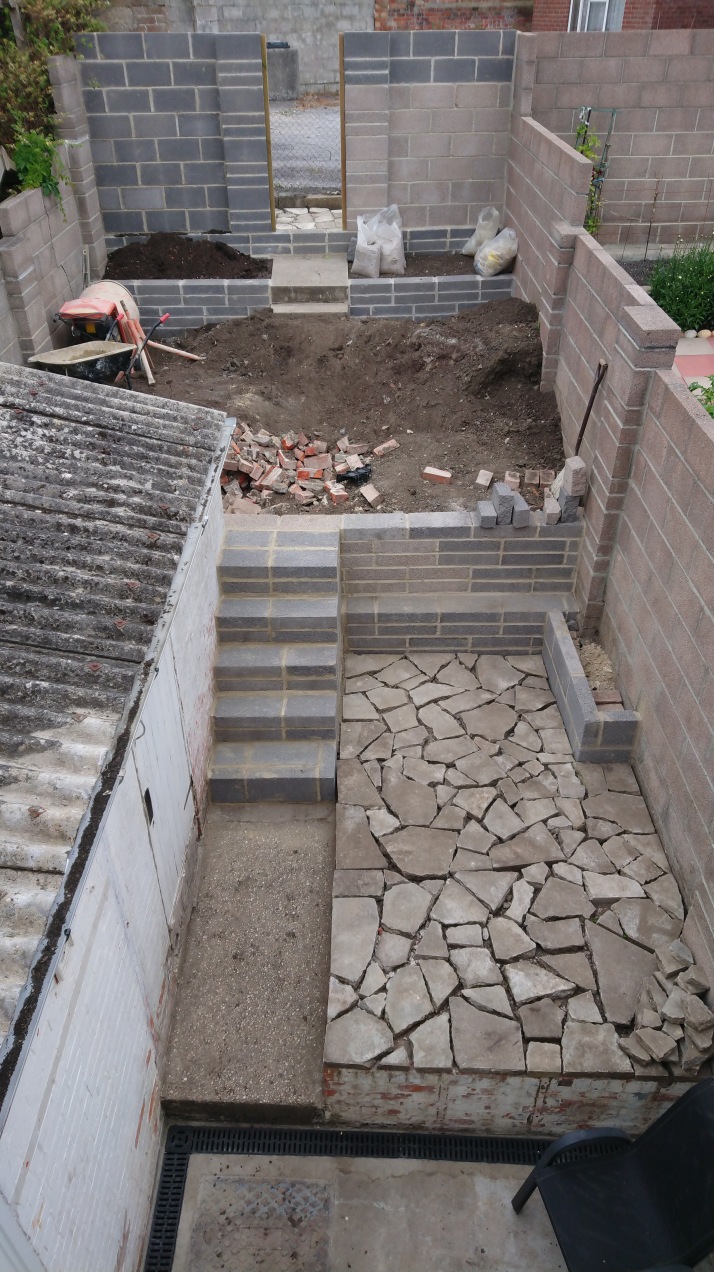 The builder called just one more time.  The gate was finally fitted and the top was put onto the side bench base. The cracked blocks in the left side wall by the old tree bed were replaced with new ones and the last of the cement was used up to level off a bit of wall for my paving and to lay some spare blocks as a windowsill for the shed window.

It would seem that the builder’s work has finished, and as soon as the last of the cement is dry, all that I need to do now is turn the new found space from a building site into a garden.

More from before : “Finishings and Fixings” and other going’s on in my “Garden“.

12 thoughts on “Building the garden” 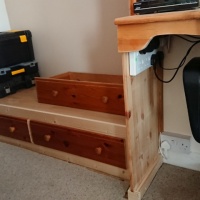