Work in Progress or Unfinished Object… That’s a question to compare with Life, the Universe and Everything … and don’t think this time I can be fobbed off with the answer “42”.

I’m thinking along the lines that if this was an unfinished object, then we would have to at least have some idea of where the end was to know that we hadn’t reached it yet and since I no longer have any idea what the patchwork will end up as, then I guess it’s a work in progress … There … Eat your hearts out little mice.

“Let’s start at the very beginning, it’s a very good place to start” … It’s OK, I’m not about to burst into song… “a needle pulling thread” and all that stuff, but the beginning goes back to the decorating of the bedroom in the old house. Terracotta and cream… “Patchwork and Pine“.

The terracotta colour was to be incorporated via the patchwork. I bought plenty of good quality material in a variety of terracotta type shades and cut it all into little pieces… Ready for me to sew back together. Yes, to anybody who doesn’t know me this sounds quite mad, but to anyone who has known me for more than a day, it seems this would appear to be quite a normal thing for me to do. I have this template, a piece of plastic in a hexagon shape, the template gives two sizes of hexagon to use, the inside, which is the template for drawing and cutting cardboard, and the outside, for cutting the material patches.

Take your pieces of material, wrap them around the cardboard with a few tacking stitches and sew them together… voila! … patchwork.

OK, so its not quite that simple, but then nothing ever is. After stitching enough patches together to make one curtain I bought the lining and discovered that the sheet of patchwork didn’t hang properly…I hadn’t taken any account of the direction of the grain in the material and it was pulling off to the corner. Well, I spread the patchwork sheet over the top of the bed and thats where it stayed until I could come up with another idea.

This picture is just half of the sheet of patchwork, see the folded edge at the bottom? Notice how the randomness of the colours come together to make a nice even pattern ?

Come on, did you really think I would leave it to chance to make a design I’d be happy with. First each sheet of material was cut into hundreds of hexagons, then depending on what size sheet and how many patches they made they were split into equal piles, fourteen being the number of piles achieved. Next one of each from the fourteen groups were stitched together into two rows of seven ensuring an equal spread of colour. From here on in, I mostly let the randomness take over, I stitched the strips together into blocks, and then the blocks into a big sheet. Simple … but very randomly organised.

I had thought of using the patchwork for covering my rockingchair cushions or maybe a headboard, or even making blinds instead of curtains but I haven’t made any decisions yet. I’m not good at thinking on my feet, or looking too far into the future. I do however have a plan. I’ve sorted the groups of patches into loads of separate little bags and plan to just keep sewing the patches into strips of fourteen pieces until I make another plan.

More from before: A little peek further into the world that I’ve “Created“. 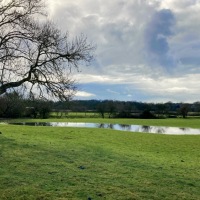